American Holocaust: The Conquest of the New World
The vision of offering rare, out of print books affordable even to limited earners. 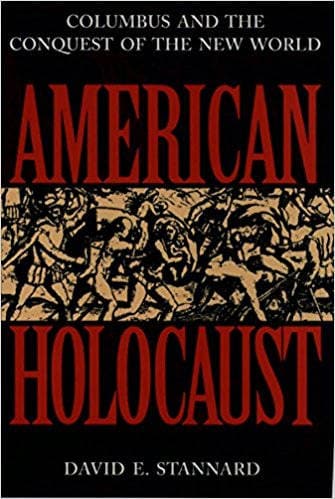 American Holocaust: The Conquest of the New World

Stannard says that the European and white American destruction of the native peoples of the Americas was the most massive act of genocide in the history of the world. Moreover, the perpetrators of the American Holocaust drew on the same ideological wellspring as did the later architects of the Nazi Holocaust--an ideology that remains dangerously alive today. Photos and line drawings.

Originally published in hardcover in 1992.;Includes bibliographical references and index.

For four hundred years--from the first Spanish assaults against the Arawak people of Hispaniola in the 1490s to the U.S. Army's massacre of Sioux Indians at Wounded Knee in the 1890s--the indigenous inhabitants of North and South America endured an unending firestorm of violence. During that time the native population of the Western Hemisphere declined by as many as 100 million people. Indeed, as historian David E. Stannard argues in this stunning new book, the European and white American destruction of the native peoples of the Americas was the most massive act of genocide in the history of the world.

"A splendid antidote to those many books on American Indian policy that tend to ignore the realities of the subject."-- Journal of American Ethnic History

" American Holocaust isa substantial addition to the library of injustice toward American Natives....From an ethical standpoint, works such as Stannard's are necessary to counterbalance the ethnocentricities of past historical works on Natives. From an academic standpoint, the book is an interdisciplinary monument. The author has taken an incredible amount of data and applied contemporary anthropological, demographic, and historical techniques to synthesize a comprehensive piece of scholarship. American Holocaust will provide a desireble textbook for students at both the graduate and undergraduate levels. Finally, scholars of Indian-white relations from various disciplines will find the book a valuable resource in terms of method and content."--Samuel R. Cook, American Indian Quarterly

"An important work that will have [Stannard] canonized by some and pillored by others by the end of the Quincentennial Year. It is the product of massive reading in the important sources, years of pondering, and fury at what Europe hath wrought in America....His convincing claim is that what happened was the worst demographic disaster in the history of our species, that Old World diseases and Old World brutality reduced the number of Indians enormously and drove away many Native American peoples over the brink of extinction. How convincing are his evidence and reasoning? Very, I am unhappy to say....Nothing can be done to improve the past, but we can at least face it. David Stannard insists that we do."--Alfred Crosby, The Boston Sunday Globe

"Offers a much-needed counterbalance to centuries of romantic confabulation about the explorer."-- The Los Angeles Times

"Vivid and relentless, combining a formidable array of primary sources with meticulous analysis--a devastating reassessment of the Conquest as nothing less than a holy war."-- Kirkus Reviews

"We need to be reminded, again and again, of what Stannard speaks of as 'the treasure of a single life.' Stannard gives us a fine review of recent literature and a rousing, effective call to define our terms, 'racism, ' 'genocide, ' and use them to describe what happened and still happens."--Ellen Nore, Southern Illinois University, Edwardsville

"A fascinating book, enormously impressive in its research and engaging in its style....Puts the Columbus story in philosophical and historical perspective. Further, it makes connections with our own time which are unsettling and profoundly important."--Howard Zinn, author of A People's History of the United States

"A shattering realization is brought home: the German holocaust was not unique in history. There is a holocaust in our American past. We owe it to its victims, and to our own future, to reflect on Stannard's merciless book."--Hans Koning, author of Columbus: His Enterprise

"In a thoroughly documented narrative, David Stannard demolishes a score of historical myths, and turns American Holocaust into a searing account of what happened in the Americas after the arrival of Columbus. It is a stirring and troubling book..."--Dee Brown, author of Bury My Heart at Wounded Knee

"A landmark of necessary remembering, American Holocaust acutely dissects the demons driving the European invaders and presents the most compelling answer yet to the horrifying question of what it was like to be 'discovered.'"--Richard Drinnon, author of Facing West: The Metaphysics of Indian-Hating and Empire-Building

"The book to read to understand the last five hundred years. Stannard has courageously documented the initial and continuing genocide of natives of the western hemisphere in an irrefutable and convincing manner."--Vine Deloria, Jr., author of God is Red and Custer Died for Your Sins

"The book offers an outstanding synthesis of pre-Columbian Indian history and demographics across the Americas. Students should find genocide thesis to be provocative."--Vincent Z. C. de Baea, Metropolitan State College

"A much needed corrective to the centuries of heroizing regarding the impact of European expansion and colonization on the New World. No one can read this book and not be ashamed of the Janus face of the West's cultural and religious roots!"--Dr. Thomas B. Andersen, St. Michael's College