Froggy Gets Dressed
The vision of offering rare, out of print books affordable even to limited earners. 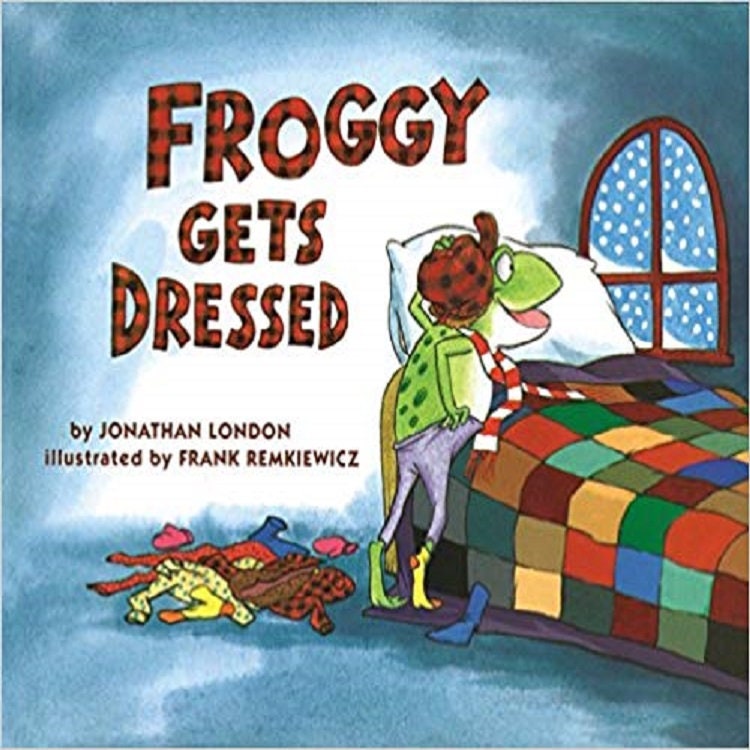 Rambunctious Froggy hops out into the snow for a winter frolic but is called back by his mother to put on some necessary articles of clothing.

Getting dressed for a romp in the snow isn't as easy as it sounds. Socks, boots, hat, mittens, scarf, coat, pants, shirt...will Froggy "ever" pull it all together?

Author/Editor Comments:
"My ideas for stories come from experience I've had, or from dreams or leap right out of my head - from my ever-active imagination," explains Jonathan London, who burst on the children's book scene in 1992 with the publication of three picture books. Since then he has published more than 20 picture books, including the popular Froggy series and the young adult novel, Where's Home?
"There are worlds of possibility within our own imaginations from which we can create stories that can make someone want to cry or laugh, play a saxophone or make a snowman. This act of writing, for me, is a part of my celebration of life, a way to give back a little for all that I have been given. Kind of thanks."

Jonathan London started writing poetry in his late teens. Although he received a Masters Degree in Social Sciences and never formally studied literature or creative writing, he began to consider himself a "writer" about the time he graduated from college. After college he became a dancer in a modern dance company and worked at numerous low-paying jobs as a laborer or counselor.

However, during this twenty-year period, London continued to write. He wrote poems and short stories for adults, earning next to nothing despite being published in many literary magazines. "It wasn't until I had kids of my own that I became a writer for children," he explains. "It all started with telling them stories when they were very young. I wrote down one of these stories, and it became The Owl Who Became the Moon, my first picture book sale (though it was my fourth to appear in print). Now I am finally making a living as a writer. A dream come true!"

Born a "Navy brat" in Brooklyn, New York, Jonathan was raised on Naval stations throughout the U.S. and Puerto Rico. Today he lives with his wife, Maureen, and their two sons, Aaron and Sean, in rural Northern California where they like to backpack in the summer, play in the snow in winter-and dance all year around.

Biographical Note:
Jonathan London is the creator of twenty-three books about lovable and enduringly popular Froggy. He is also a poet and a novelist. Jonathan and his wife live in Graton, California.